Signals from the outside world can work through the epigenome to change a cell's gene expression.

In the activity below, you act as the signal. As you turn the control knob, epigenetic tags come and go to change the shape of the gene.

Notice what happens to the mRNA and protein levels when you manipulate the epigenetic tags on the gene. Gene, mRNA, and protein production are linked. They change together.

For more information about transcription, translation, and the molecules of inheritance, visit Basic Genetics.

Could You Really Do This?

Yes! Researchers at McGill University engineered a type of cell much like this one, where GFP level provided a readout of gene activity.

Researchers placed the GFP gene into cells growing in culture dishes. Then they added different compounds to the cells. They compared the amount of GFP that the cells produced before and after they added the compounds to see whether they made the gene more or less active.

Cells like this, along with other biological tools, help researchers understand how signals from the environment shape the epigenome. 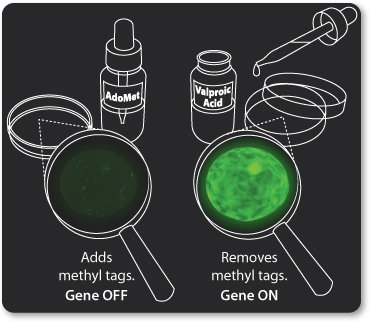 In these cells, GFP production is a readout of gene activity.

Cancer develops when a cell becomes abnormal and begins to grow out of control. Cancer can begin when mutation changes a cell's DNA sequence. But cancer cells also have abnormal epigenomes. In many cancers, some genes are turned up and some are turned down -- often in the very same cells.

Cancer is just one of a growing number of diseases that are being linked to abnormalities in the epigenome. 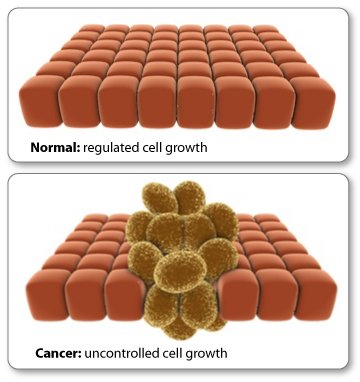 Cancer cells can also have genes that have more methyl (are less active) than normal. The types of genes that are turned down in cancer cells:

Researchers are exploring drug therapies that can change the epigenetic profiles of cancer cells. One challenge with epigenetic therapies is figuring out how to target drugs to the right genes in the right tissues.

For more information about the role of genes in cancer, visit the American Cancer Society page on Oncogenes and Tumor Suppressor Genes.